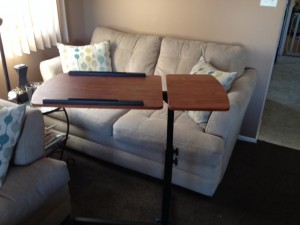 Welcome to Writer Wednesday! I think Wednesdays are becoming my favorite day of the week. If you look at the picture above, you’re probably figuring we’re going to be talking about standing desks. When I first started reading about the connection between health and sitting too long, my intention was to go out and buy a standing desk. However, after shopping online for one I found out this was going to be a pretty expensive purchase. And I wasn’t even sure I’d a) like working with at one or b)stick to it every day to make it worth investing in. So I decided to take a look at my local Staples store and see what they had.

That’s where I found the table you’re looking at in  the picture. Not quite a standing desk but more like what would be called a typing table for laptops. Years (and years) ago typing tables were used for typewriters. They were made for the right height for your elbows and wrists to prevent some pain and wear and tear that comes from constant typing. The typing table of today accommodates lap tops and netbooks. Besides the flat surface for your device, there’s a flat table surface for a notebook, notes, pens or your tea (speaking for myself of course). The leg of the table adjusts so that if you don’t want to stand after some time (or at all) you can lower the table and sit just about anywhere. But I bought this affordable table, a mere $50.00 compared to several hundred, with every intention of standing. Oh, I saw myself like Ernest Hemingway, who wrote his books with his typewriter positioned chest high from him, cranking out thousands of words a day. I would be prolific and not fall into that old habit of slouching while I worked. I imagined my posture  arrow straight and how proud I would make my chiropractor.

A writer can dream, can’t she? A dream it was because that’s not exactly how it’s going. The first attempt I made to work with this desk I worked for about an hour and quit. I just didn’t like it. I attributed it to all those years of curling up with a lap top on the corner of the sofa. I put the desk in the basement and forgot about it. The second attempt lasted a little longer. I worked at it for about 4 days, for about three hours each time. The problem? My back was killing me. I’m not a wimp. I can deal with aches and pains, but four days of a throbbing back was enough for me. Back to the basement it went. It didn’t really matter that much. At the time I wasn’t on a deadline, and so I decided to just get up every two hours and run up and down the steps in my house to get the blood flowing. Until this past week when my work load tripled. Now with several deadlines and multiple projects I realized that it’s time to drag that table up from the basement and stick with it.

So there it is. I’ve been moving it around from room to room, depending on what I’m doing alongside my writing. I have to admit that it’s nice to be able to keep my work at arm’s length while stirring a pot of spaghetti for dinner. And because I like to work with background sound, it’s nice to be able to work in the living room while the family is watching television. I’m still getting a little pain in the back, but I’m trying to shift my body weight from left to right. I also saw an article about using a stool and propping up one leg and alternating that too. This time I won’t be so quick to quit. I’m going to give it my best shot. Because I’m just feeling so blessed to have the projects that I have in front of me that I think I won’t even miss that comfy little corner on the sofa.

Tell me about a change you’ve recently made in your writer routine. Have you stuck to it? How long did it take for you to adjust to it?

Thanks for stopping by today! I hope you’ll come back next week!